In the aftermath of the Presidential election, there’s been a lot of talk about “soul searching” among Democrats and Clinton supporters. As we try to unpack and learn from this election, however, it may be far more useful to spend time “process searching” about how Trump won. And vow to do it differently next time.

Discover the people behind the label

For weeks leading up to Nov. 8, the media obsessively analyzed the projected voting trajectories of various demographic categories: white men, African-Americans millennials, and on and on.

Clinton’s campaign banked on significant support from the “women’s vote,” particularly those with a college education. Most polls supported this assumption. And yet, Clinton’s performance with women significantly lagged Obama’s in 2012. It turns out that gender wasn’t the defining factor for many women voters.

While focusing on “white college-educated women” or “Latino millennials” made it easier to calculate and compare “statistically significant” numbers, it failed to capture the complexity of individual voters. Nor, it turns out, did the polls and analysts accurately discern voters’ true feelings.

The process of design starts with a very different premise. It doesn’t begin with a solution in mind, but rather with a deep understanding of individuals at the most human level: what they value and enjoy and what causes them pain. Design researchers use open-ended interview techniques and observation methods to discover what individuals need in their lives based on their unique perspectives and worldviews. Designers utilize tools like empathy maps to capture feelings and journey maps to document actual behavior. Design research moves away from relying on what people say in surveys and focus groups, which is often misleading or inaccurate, to find organic, unscripted insights from watching how they behave.

Go where votes are

Politics is known for being an “insider” occupation, fueled by expensive industry consultants, analysts and strategists. Ideas are drafted in Washington, D.C. and then pushed out to the rest of the country through carefully orchestrated media efforts.

But Washington is not the rest of the country.

So, how can politicians learn about what people in remote areas really want and need? Go to where voters are…and listen!

Representative Debbie Dingell, a Democrat from Michigan, was not surprised by the Trump victory. She’d been tracking the mood and momentum closely for the last year by listening to local voters where they convened: bars, coffee shops, places of worship, gathering halls. Unfortunately, her message to the campaign fell flat; she was considered a paranoid outlier and not taken seriously.

“I was the crazy one. I predicted that Hillary Clinton was in trouble in Michigan during the Democratic primary. I observed that Donald Trump could win the Republican nomination for president. And at Rotary clubs, local chambers of commerce, union halls and mosques, I noted that we could see a Trump presidency. [And the reaction was] ‘That’s Debbie, it’s hyperbole, she is nuts.’

From the beginning, I knew the Downrivers [a collection of communities south of Detroit with strong union membership and workers employed in auto and manufacturing plants] would support Trump both in the Republican primary and in the general election. I witness the emotions and passions of their residents every day, and I believe they are what elected Trump president.”

While it may be unrealistic to think that any presidential candidate is going to visit every small town or hang out in bars, this election suggests that surrogates and local representatives who live with and deeply understand local voters need to inform the strategy, not just push the message out.

Instead of just funding the same political consultants, pollsters and spin doctors, campaigns would be wise to hire professionals or design firms that utilize research tools like ethnography and learning journeys to inform the core tenants of the message.

Clinton talked about her candidacy in terms of her unique qualifications and detailed policy platform: all credible, important, and deserving attributes. Her slogan, “We’re Stronger Together,” assumed that voters were already feeling confident and secure.

Trump, in contrast, found greater resonance with his slogan “Make American Great Again.” He was selling a nostalgic version of the American dream and change from the status quo, which had not delivered on every American’s personal dream.

Clinton worked tirelessly to reassure Americans that the U.S. was already great and that Trump was touting a false promise. But for many Americans, continued job instability, flat salaries, and expensive, uncertain access to high quality healthcare and education were not appealing. Clinton stressed her lifetime and accomplishments in public service as prerequisites for being the Commander in Chief. But, to many voters, it was precisely Trump’s outsider status that proved most appealing.

Throughout his campaign, Trump ignited and exacerbated deep-seated fears about our changing macro environment, often using simplistic, incendiary rhetoric. He routinely exaggerated threats arising from the “massive” immigration of refugees, distorted “lopsided” trade and security agreements with other nations, and provoked fear and hatred of people of different backgrounds.. Triggering emotion was more important than communicating facts. Fact checkers repeatedly pointed out that Trump’s claims were cases of “liar, liar pants on fire,” but the voters didn’t seem to care. They felt seen and heard by someone in power.

The reality is that our world is increasingly complex and uncertain, bringing up new types of challenges that don’t have easy or simple solutions. Issues such as climate change, demographic shifts, globalization, technology disruption, cyber security, are real and not going away.

long term, we need to invest in a 21st century education that educates all Americans about these issues, builds robust creative and critical thinking skills, and instills an applied understanding of civics and ethical responsibilities.

While education reform has never been easy, there are many experiments worth watching such as the XQ Super Schools effort, initiated by Laurene Powell Jobs in partnership with the design firm SYPartners. Preparing our future voters to be expansive and resilient problem solvers in an uncertain world may be the most important investment we can make.

Short term, the next political campaigns should recruit designers to go out and listen to voters in addition to visual designers, infographic experts, UX specialists and narrative storytellers to communicate complex issues in ways that voters can understand. Abstract words like “fiscal policy” or “campaign finance reform” don’t resonate with people who fear that they’ll lose their job to a computer or a new immigrant. Paint the picture — literally — of the current reality and the new ideas to inform and align voters, rather than defaulting to simplistic soundbites. Bring in talent from art and design schools, creative companies like Pixar and Disney, and design-driven companies like AirBnB and Slack.

There is still a lot of repair and healing ahead before we can turn to the next election cycle. It’s time to reflect and to return to the fundamental thing that unites us all regardless of age, location, background, and economic status: our core humanity.

Design, like democracy, is a process that starts and ends with people.

A passionate design strategist and executive educator, Lisa creates immersive leadership experiences at the MBA in Design Strategy at the California College of Arts and Singularity University. She is the coauthor of the bestseller Moments of Impact. 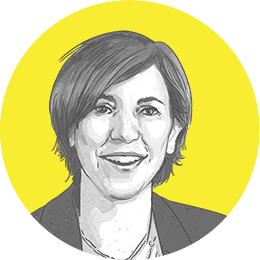