The future of work is upon us. All around us, a world that started with factory workers and lines of desks (and cubicles) is being transformed by technology, globalization, and generational dynamics, into something entirely new. Increasingly, today’s workers don’t want to be bound to a desk in a monolithic company. Rather, they want (and need) flexibility and community.

Enter WeWork. For those not familiar with WeWork, the founders Miguel McKelvey, Adam Neumann and Rebekah Neumann first launched the ‘co-working community provider’ in 2010 after cutting their teeth on GreenDesk, an eco-friendly co-working space. Fast-forward seven years and WeWork has innovated beyond being a ‘design & construction company’ to the fastest growing lessee of new commercial space in the US. Their mission of “creating a world where people work to make a life, not just a living” means thousands of freelancers and/or entrepreneurs are connected with workspace from previously empty buildings. And not just any old office space, but one promising the best of community with all of the amenities one could ever need. If the micro-roasted coffee or fresh fruit water didn’t seem compelling enough, how about the opportunity to rub shoulders fellow entrepreneurs, creative freelancers, and even corporate workers in satellite offices? But the bigger question is, what potential game-changing businesses will emerge from a place that boasts of nuclear physicists sitting next to sales teams next to freelancers next to financial advisors? After all, Jon Gertner, describes in his book, The Idea Factory: Bell Labs and the Great Age of American Innovation, “most feats of sustained innovation…occur when people of diverse talents and mindsets and expertise are brought together, preferably in close physical proximity where they can have frequent meetings and serendipitous encounters”.

Today, WeWork valued at $20B USD. That’s $20 billion…with a B. So, what story did WeWork tell to get where they are? Why not use the Storytelling Canvas to plot that out?! 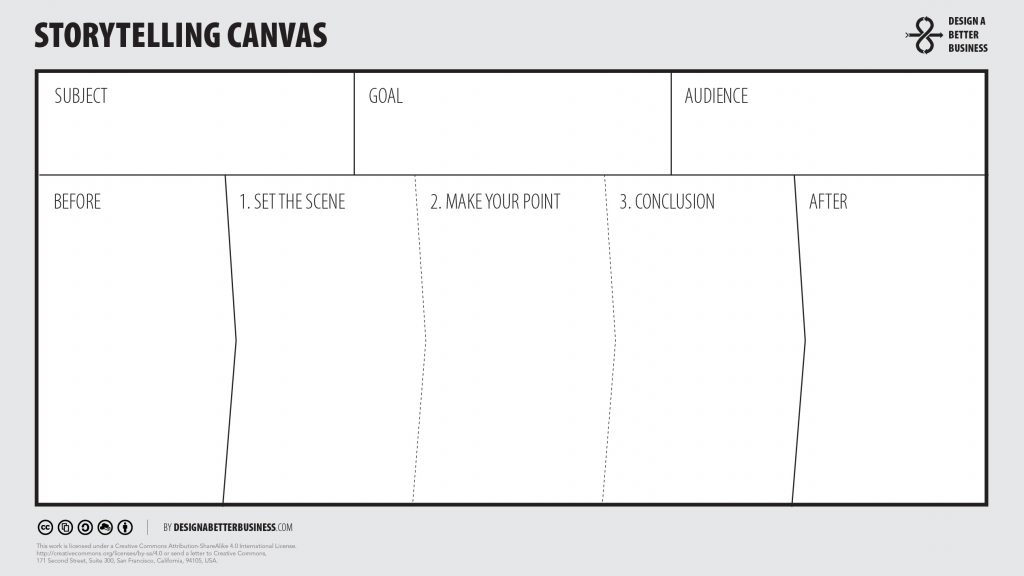 As described in a previous article, titled How To Design A Compelling Story For Any Audience, stories, including pitch decks, must be designed for the particular audience you’re speaking to. This is where the Storytelling Canvas shines. Making some simple assumptions about WeWork’s beginnings, based mostly on simple searches about its history, it would seem that the subject of the story the founders originally wanted to tell was about how “community” separated WeWork from every other co-working space. They would have told this story to investors – lots of investors – in order to finance WeWork’s rapid expansion. 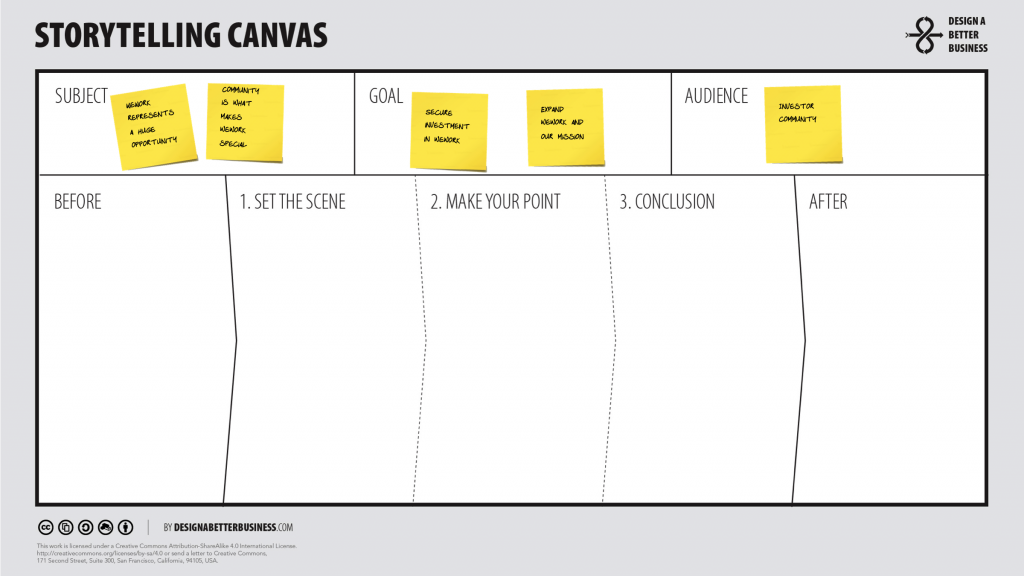 Getting into the audience’s heads a bit, they probably thought of the co-working market as being fragmented, small, niche, and likely a bit stodgy. How much money could hackerspaces pull in? But, the WeWork founders would need to make investors aware of exactly how big the co-working market is, and who they might find in that market, from entrepreneurs to mid-size startups, and even larger companies needing satellite offices. Plus, in 2010, we were still in the middle of an economic crisis wherein in there were multitudes of empty buildings looking for lessees and buyers. So, that part of the story would be about people looking for space and lots of empty buildings that could be that space. 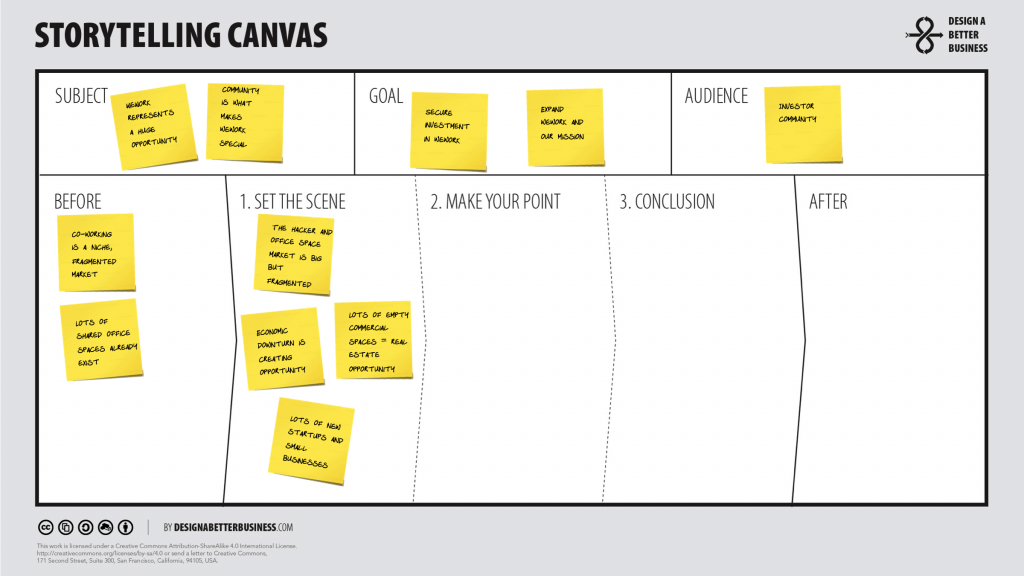 The ah-ha moment would likely come in that these people have a real needs and desires, aside from shared desks and wifi, when it comes to co-working; they seek COMMUNITY. WeWork’s mission, “To Create A World Where People Work To Make A Life, Not Just A Living”, would have made it somewhere in there. 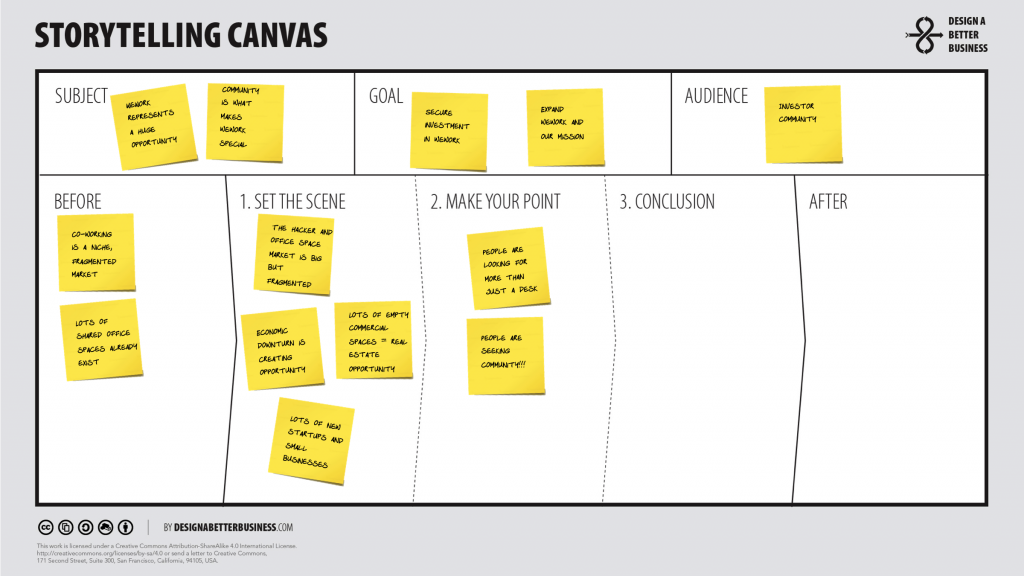 The conclusion of this story would have been the opportunity to join (i.e. invest in) WeWork to build a company that could address people’s life-work needs globally. Afterward, WeWork would want investors excited to write big checks. 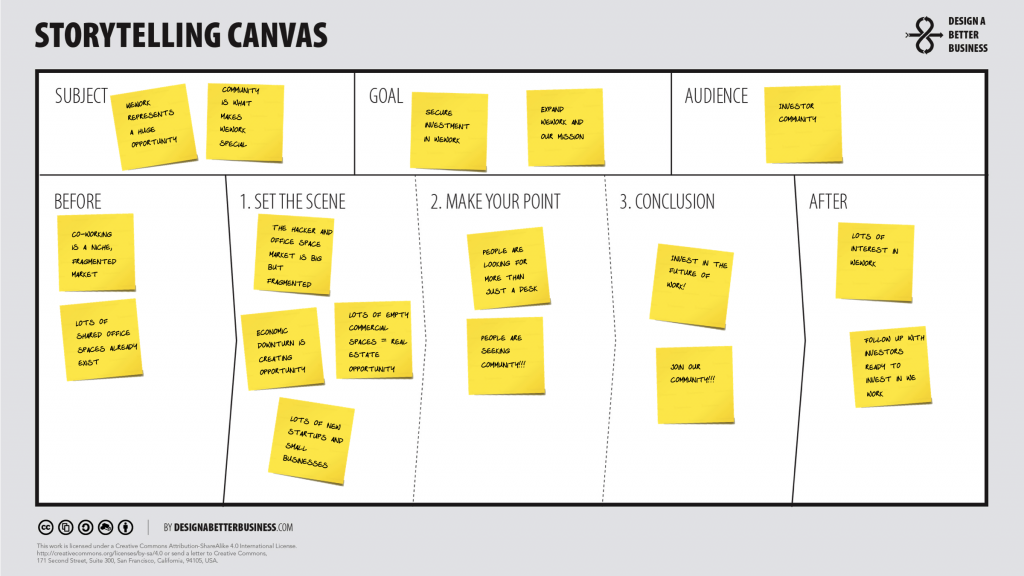 Just like marketing strategies, business models, websites, and apps, the best stories are designed intentionally to have maximum impact. Sure, WeWork’s story is a unique one in a very unique space. However, if you look past WeWork’s business model and value proposition, there lies a story that’s been told for decades, or maybe even centuries, about large segments of customers looking for a solution to a problem, for which the founders have stumbled on and can uniquely address. For this, the Storytelling Canvas is a great tool for designing the story you want to tell.

This story was a written (and collaborated on) by Stephanie Knabe & Justin Lokitz, from Business Models Inc., San Francisco.

So, what’s your story?

Justin is an experienced strategy designer and MD of the Business Models Inc. San Francisco office. He leverages his experience across a wide range of industry sectors to help companies design innovative, sustainable business models and strategies for the future. 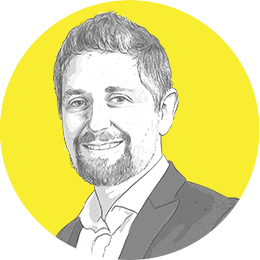